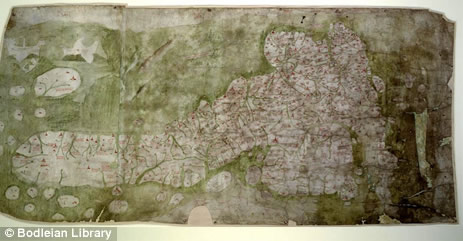 The oldest surviving map of British has been digitally released into a Google style interactive map.

The map dating from the 14th century is one of the country”s most historical documents and formed the basis for nearly all the maps that followed.

As part of a 15-month project, researchers at Oxford University have fully investigated the map and these findings can now be viewed as part of the online version.

Nick Millea, map librarian at the University of Oxford’s Bodleian Library, described how a team of investigators discovered the secrets to the Gough map, which he described as “a national treasure.”

Talking to the BBC Millea added: “It’s a very unique piece of cartography and there’s nothing else in the world like it – a map of that level of detail from that period of time.”

The map’s origins have been pinpointed to 1375, instead of 1360 as previously thought, by investigating differences in English handwriting over the period. They also confirmed that it was revised in the early 15th Century.

The map was bought by Richard Gough 1774 for two shillings and six pence and donated by him to the Bodleian Library in Oxford in 1809.

The online version boasts some Google-esque type features, including the ability to browse by place name – both current and medieval and also by geographical features.

Highlight the location and a fact box can be seen revealing geographical appearance, etymology, appearance on earlier maps – and even a cross reference to the real Google maps.