Why digital mapping may control the future of the car industry

We’ve seen the increase in the development of self-driving cars, but it’s the digital mapping behind them that are the real secret weapon.

With self-driving cars in the news so often, it would be ideal to have a look at the importance of digital mapping data in future navigation systems and why the owners of the maps may end up controlling the future of the automotive industry.

How it works currently

Cars with self-driving capabilities need data, and a lot of it. An array of sensors are required to map the world around it and provide accurate location and movement data. This is all processed by a car’s central computer so it can make split second decisions. But the better the initial digital mapping data, the less data the car will have to process and interpret. The new generation of navigation systems will therefore need to know the precise three dimensional location of features such as:

Who has the advantage?

Google are positioned well in the industry, having invested heavily in mapping while at the same time developing self-driving car technology. Apple are also out mapping the world to collect data whilst at the same time testing a number of autonomous vehicles in California. Car manufactures are likewise making moves to secure partnerships with mapping companies. As far back as 2015, Volkswagen’s Audi unit, BMW and Daimler decided to join forces to buy Nokia HERE mapping business for a whopping 2 €bn.

It’s widely believed that these companies are currently mapping roads with laser scanners and cameras and using a combination of computer algorithms and manual labour to create the detailed map bases required. The amount of labour required is a closely guarded secret. Here’s a typical output from a laser scanner, courtesy of Oregon State University. 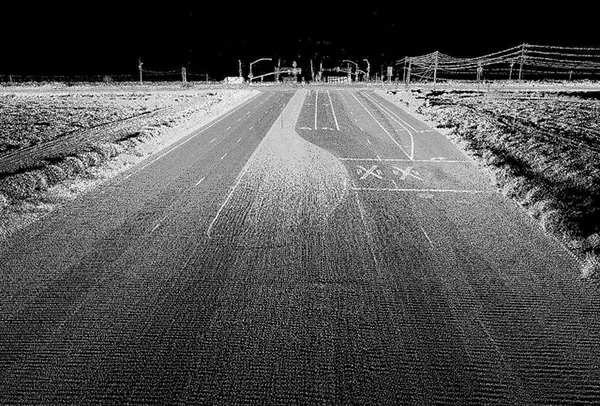 Digital Mapping companies are going to have their work cut out though. For self-driving cars to be a reality, they can’t just concentrate on cities and highways, they need to have comprehensive coverage. The cost to keep such mapping data up-to-date will also likely be huge. Cars themselves could help in his capacity, surveying as they drive. However the amount of data to be ‘uploaded’ to the cloud and analysed could well prove the idea unworkable.

With such accurate and detailed data, other unexpected factors also start to play a part. In 2016, Australia announced it was going to simply shift its GPS coordinate system by 1.8 metres (about the width of the average car). The reason? The country moves around 7 cm north every year due to tectonic plate movements.

So the creation and continuous maintenance of accurate and up-to-date digital mapping data for navigation in the future may ultimately make or break the involvement of certain companies in the self-driving car industry.

Maps it would therefore appear, are as important as the development of the technology itself.

Want to know more about Software Products and how we can help you? Why not chat to a member of our team today by calling 01993 880944 or email us at enquiries@giperspective.co.uk