The use of Geographic Information within the European Commission

The European Commission employs over 23,000 staff and directly affects the everyday lives of the population of all the 28 member states. Where action is more effective at European Union (EU) level than at national, regional or local level, the Commission has the right to propose legislation for adoption by the European Parliament and the Council of the EU (national ministers). The Commission is also responsible for putting the EU’s common policies (like the common agricultural policy and the growth and jobs strategy) into practice and managing the EU’s budget and programmes.

In the same way as UK Local Government provides information for people over a certain geographic territory, the Commission deals with vast amounts of data which has a spatial or location element. For example, maritime data is collated and presented in relation to the European sea basins, and energy efficiency data is shown according to standardised regional boundaries, to allow comparison over different periods. With such a vast requirement for geographic information, this article will consider the use of geographic information and GIS within the European Commission.

The Commission is divided into some 40 directorates-general (DGs) and services. Many of these DGs deal with specific themes or activities such as Maritime Affairs and Fisheries, Agriculture, Energy, Transport, Environment and Safety. Each of these vertical departments undertakes a programme of activities that includes data gathering, research and publications, which in some way will require the handling and processing of geographic information. There is also a separate central statistical unit called Eurostat which has an important role working with geographic data and the systems and processes to handle it.

Take, for example, DG MARE’s European Atlas of the Seas. This is an online interactive atlas that features a wide range of information on sea depths, fishing quotas and coastal activities. It was developed to raise awareness of Europe’s oceans and seas. The atlas allows a user to choose themes and subthemes of data over a map base, and then view how these have changed over time. The atlas is a good example of how the Commission has generated and published a vast amount of geographic data, on themes such as marine protected areas or fishing quotas by country. 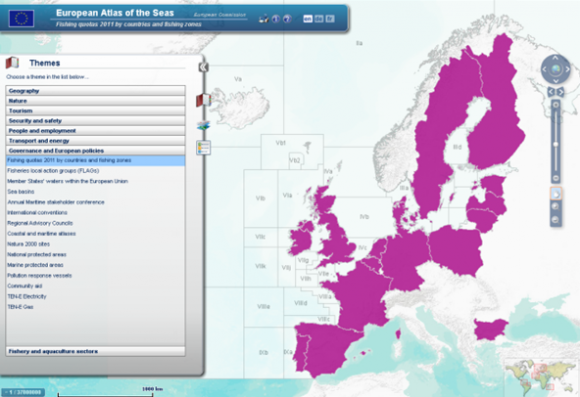 Another example of geographic data being generated and published by the Commission is the series of Soil Atlases published by Joint Research Centre (JRC). JRC provides scientific and technical support for the conception, development, implementation and monitoring of EU policies. Just one part of this is providing a single focal point for all soil data and information in Europe. Geographic data is gathered on soil types, erosion risk, landslide risk and carbon content and published in a series of printed atlases which have focused on world regions. Europe, Polar, Africa, and Caribbean and Latin America atlases have all been published in recent years.

Perhaps the best example of the European Commission’s approach to geographic information, and an indication of how seriously this is taken, is the INSPIRE directive. Coming into force in 2007, with full implementation by 2019, the INSPIRE directive aims to create an EU spatial data infrastructure (SDI). The SDI will allow spatial information to be more easily and efficiently shared across the EU. This will be achieved by the member states all following the same implementing rules for spatial data within their own country. In particular, INSPIRE aims to enable the sharing of environmental geographic information among public sector organisations, to better facilitate public access to spatial information across Europe, and to assist in policy-making across boundaries. The programme will eventually benefit all departments within the Commission who use geographic information across the great variety of topical and technical themes.

As a large and complex organisation that generates and publishes vast amounts of information, the use of geographic information is everywhere within the European Commission. These examples show just a few ways in which spatial information is being used.