The web-based GIS portal is to map marine and maritime data, renewed for a further two years

Our company has been awarded a renewed contract as part of a consortium of companies (with Cogea, AND International, AZTI Tecnalia, CETMAR and Eurofish International Organisation) by the Directorate-General for Maritime Affairs and Fisheries (DG MARE). The aim of the contract is to assemble fragmented marine and maritime mapping data on the extent and intensity of human activities, and make them available through a single web-based GIS portal.

The EMODnet Human activities web portal, previously developed by us, presents marine and maritime mapping data of a series of activities related to the sea. The new two-year contract (with available two-year extension) will enable us to further develop the mapping portal and related web services. The data themes and coverage of the datasets will also be extended.

In 2008 the European Commission proposed to take steps towards a European Marine Observation and Data Network (EMODnet) after marine and maritime data was confirmed to be a barrier to scientific understanding, a brake on the economy and a handicap to government decision-making.

“Human Activities” was added to the family of EMODnet portals in 2014. The mapping data is collated and harmonised by other consortium members from across the EU. GIS layers such as wind farms, ocean energy facilities, pipelines and hydrocarbon extraction facilities can be viewed, interrogated and downloaded using the web-based GIS portal.

The website uses responsive design, allowing the information pages to resize and adapt the layout according to the screen space available on the viewing device. The main data viewing page is designed for non-GIS experts. It allows the user to toggle GIS layers on and off, identify features and related information and filter data by category or custom data ranges. Custom maps can also be easily shared via social media.

In a 2016 survey, the portal was rated highly by users [PDF] for its overall visual appeal, ease of navigation and user friendliness of the interactive map. 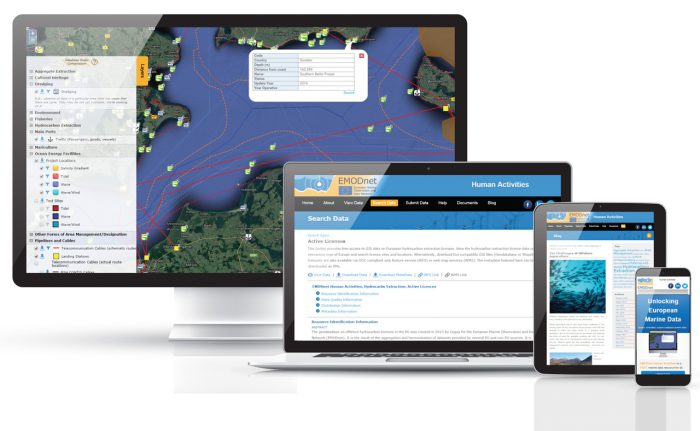 During the renewed contract, the web-based GIS portal will be improved by

The web-based GIS portal will continue to use open source technology and be hosted by us. We look forward to working with our consortium partners once again.

Watch this video to find out more about EMODnet and how it is used by the European Commission.